Men are Pigs! (But I Love them Anyway)

From just plain funky to rank!

Yes men are pigs!  Here are some of the things that I find particularly piggish!

1.  Funky feet!  Yes men who are hygienically challenged!  There is nothing worse than a man taking off his shoes and almost flooring you with the sulfuric stench emanating off his feet.  Try dating such a man!  I went out with a man like this once and was almost floored as we were about to get the groove on.  Needless to say, I sent him on his way!  That was after he called 911 to revive me!

2.  Men who suffer from chronic halitosis!  Didn’t these fools ever hear of toothpaste and mouthwash? Truly vomit inducing!

3.  Men who have a mortal fear of soap and water!  This is self-explanatory or it should be!: 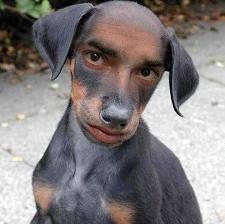 5.  Sacks of shit in cheap outfits:

7.  Men who refuse to put the toilet seat down. I almost broke my left buttock whilst taking a piss in the middle of the night!

8.  Men who sport grotesque mustaches and refuse to wash them!

9.  Men who do-not wipe their arse-holes after taking a shit  or wash their hands after shaking hands with the devil! 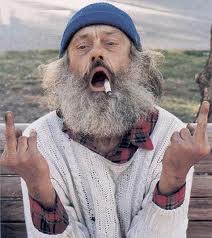 11. The worst, cheap bastards.  I dated a man once whose idea of a ‘romantic’ evening was going to the local soup kitchen.  Before ‘dinner’ we took a turn around the local park and sat on a bench.  He then proceeded to pull out a bottle of AquaVelva and a can of apple juice.  He referred to this concoction as an aperitif.  After getting liquored up somewhat, he became amourous and wanted to hold hands!  He had the damned nerve to ask for a doggy bag at the soup kitchen!  He then panhandled for at least two hours in order to raise bus fare to get home.  He couldn’t raise enough for me so I had to walk home.  Needless to say that was our first and last date! 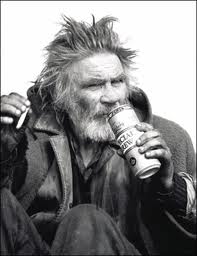 My failed date and his 'concoction'!

Well men are pigs and the lists of their piggery is endless but I love them anyway.  For you men who take offense, consider these words from the greatest cracker every to grace the earth:

What would men be without women? Scarce, sir…mighty scarce.

Markus Twainus.  Good day to you all!

This entry was posted on December 8, 2011, 23:06 and is filed under Uncategorized. You can follow any responses to this entry through RSS 2.0. You can leave a response, or trackback from your own site.